skip to main | skip to sidebar

Thursday turned out to be a very hurried day. Because there was a previous holiday, my schedule says I should lecture at Kisubi Brothers University College (which didn't expect me until 2) at 9 a.m., then N...University at 11, then Makerere University at 1, after which we will have a white knucked ride to Fort Portal where Elizabeth Ross' XO project is deployed. They expect us before 6.

Well, some good, some not so good news. 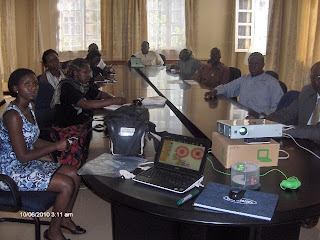 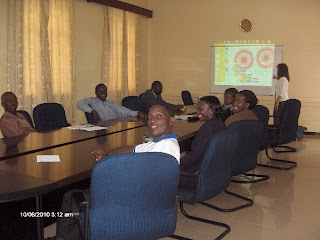 We arrived at 9 and the brothers were so gracious, got together a bunch of administrators lickety-split and was able to deliver my powerpoint and the demo without a hitch. Whew!
That's me showing off my Logo skills above right!
The next university was really moot. We went to Nkumba University from office to office to find the right contact but signals must have crossed, so we decided to bail out in order to make our next appointment at Makerere.
Makerere is the biggest university, most well known but for some reason, they also had some trouble finding us an audience. A conference was going on for the education students. Sounds perfect but these were secondary school teachers. The Dean called ahead to make sure a room was ready for us and our host was told to send in the secondary teachers as they are also qualified in the primary schools. What they didn't account for was ELECTRICITY. Boy, do we take a lot for granted. 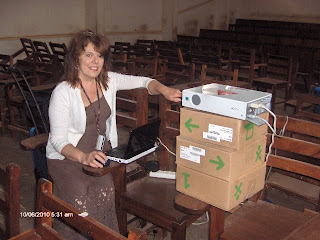 There I was with my projector, my XO, my netbook and assorted cables and adapters but no electricity.
As they called in the worker to string extension cords together to reach the generator on the other side of the building, the cleaning 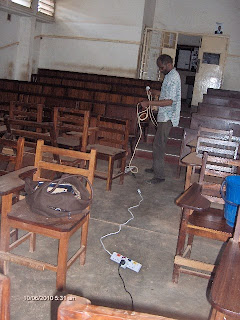 lady was wiping the dust from the desks, even where I was setting up on small student desks and squeezing my body in and out of precarious situations. The XO boxes became the projector podium. 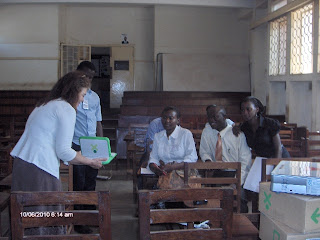 But, time was running out because we had to leave for the Kasiisi project, a four hour drive, so I punted and demonstrated from the XO and the netbook on battery power, no projection. I gathered the student email addresses, one or two are particularly interested and I will include them in my collaborative group. 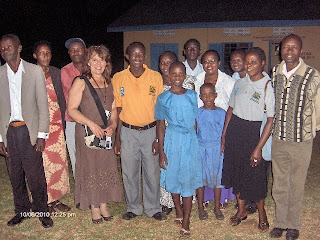 Later, just as we arrived at Kasiisi, five hours of bumpy road later, the dean from Makerere called but I have yet to make contact- couldn't talk then-bad timing. We had a wonderful visit with the eager folks at the Kasiisi Project. They graciously showed us around. They waited until 7 for us and had to leave in the pouring rain. We saw the generator they use to power up the XOs, which takes 20 liters of petrol every 3 weeks. Petrol seemed to cost about $3 a liter! They are hoping that Elizabeth Ross can come up with the funds to connect them to the hydro-electric facility.
We saw a classroom that seats 102 students with one teacher. 2 classes use the XOs but there are 1000 students at this primary school. Some walk 8 miles one way to come to school, with only porridge for lunch! Our US students should see education this way, as a privilege, not a given. The people were so hospitable; I only wish I could have done more for them.
Posted by Director at 2:49 AM